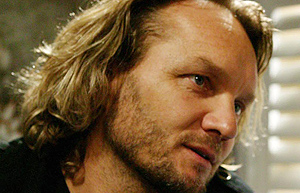 Gardy drove into town on his motorbike and instantly clashed with Charlie for speeding, but claimed he was just trying to get her attention. He then went to Roman’s house and let himself in. Nicole and Ruby were terrified when they arrived back to find a strange man in the house but when Roman, who had been asleep upstairs, responded to the commotion he revealed Gardy was an old colleague from the SAS who he had asked to come and see him. After briefly meeting Nicole’s boyfriend Trey and jokingly remarking Roman knew twenty-seven ways to kill him, Gardy took Roman for a drink. It was then that Roman recalled the full story of what happen to their comrade Mark Gillen: It was Gardy who shot him in the leg when he tried to run under fire but, contrary to what he told Mark’s brother Elliot, Roman shot Mark and killed him when he stole a vehicle and tried to run over Gardy, which they covered up.

Roman believed guilt over the incident was causing his psychological blindness but Gardy talked him out of confessing. When Miles joined them, Gardy repeatedly mocked him for his supposedly soft ways. After an argument broke out between Hugo and John, who was accusing Hugo of lying about being attacked by a shark, Gardy punched John and sparked off a brawl, then took Roman out to get drunk. When he later found Roman had trashed his kitchen in frustration, Gardy took him onto a bridge, handed him what he claimed was a parachute and said he’d need to be able to see to know when to pull it before pushing him off. The drop was only into shallow water but it failed to have any effect.

Gardy went to get a bottle of scotch from Alf and, when Nicole had a go at him, suggested she had a crush on him and stroked her. He then got Roman drunk, turning Miles away when he came to the house and scaring Nicole off with more innuendos. When Roman came to, his sight had returned and he credited Gardy. After disappearing for a few days, Gardy returned and scared Nicole off again by commenting on her appearance before taking Roman to a bottle shop and shocking him by announcing they were going to rob it. When Gardy charged into the shop with a shotgun, Roman had no choice but to join him and make sure no-one was hurt. When Charlie mentioned the robbery to them the next day, Gardy feigned surprise and warned Roman that if he backed out he’d not only tell the police that Roman was behind the robbery but about what happened in Afghanistan as well, revealing he needed to make money to pay back some people he owed.

When Leah brought VJ to see Roman, Gardy scared him by suggesting that in Afghanistan they used to play football with decapitated heads. Roman tackled him about his behaviour towards Nicole and Gardy said he’d stay away from her, then drove Roman to a warehouse and said they were going to rob it. He announced he had another job to do to finance the raid and spent the day following Jenena Palmer, including to the Diner where Leah took him to task for his behaviour. Once Jenena had returned home, Gardy took her and Trey hostage but didn’t realise Nicole was hiding in Trey’s room. He was on the verge of finding her when Roman arrived, having been summoned by Nicole, and let Gardy go on realising it was him. Gardy later explained he’d planned to use Jenena to rob the bank she managed.

Charlie questioned Gardy over the robberies, having learned he was discharged from the army for violent behaviour, but he gave Roman as an alibi. When he walked in on Miles and Roman talking, he realised Miles knew what was going on and threatened to hurt Kirsty, Jai and Oliver if he interfered. He and some other men grabbed Roman off the street and got him to join them in the warehouse robbery but Roman managed to send Miles a text message and he informed the police, with Gardy and the others being scared off by the sirens. When Gardy found the message on Roman’s phone, he knocked him out and gave the smashed phone to Jai to give to Miles. He then drove Roman back to the warehouse and said they were going to rob it now or he’d kill Nicole.

Roman convinced Gardy to wait until the workers had gone home and Gardy commented on how Afghanistan had taught him there was no difference between soldiers and civilians and they were all fair game. The pair managed to take the security guards and a clerk working late prisoner but Gardy was annoyed when Roman locked them up instead of killing him. He and Roman aimed their guns at each other but when Roman fired he found Gardy had removed the firing pin. Gardy shot him and began loading up laptops but then noticed Roman was gone. A game of cat and mouse saw Roman choke Gardy into unconsciousness before collapsing.

When they both recovered, Gardy grabbed a handgun and Roman took cover as Xavier wandered into the warehouse. Gardy grabbed him as a hostage and headed out onto the wharf but was confronted by Hugo, who fired a harpoon gun at him, allowing Xavier to escape. Roman then emerged and shot Gardy. As Charlie and the police arrived on the scene, it was discovered Gardy had disappeared, with the blood trail indicating he had jumped into the river. Despite a police search, no trace of him was found, dead or alive.