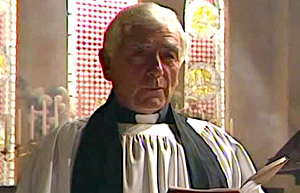 Reverend Flowers was first seen at the tennis competition, which took part in, and at which he was offered some pickles by Betty Fullwell.

It was then a case of two weddings and two funerals, as he first attempted, unsuccessfully, to marry Roo Stewart and Frank Morgan and then presided over Alan Fisher’s funeral. He was more successful at marrying Bobby Simpson and Frank Morgan.

He was next seen presiding over the emotional ceremony after Lance’s pet goldfish, Jonah, had died.

Following Morag’s departure from the bay, Celia wanted an exorcism carried out on the house, which Reverend Flowers declined. The following episode he uncovered Celia’s drinking problem.