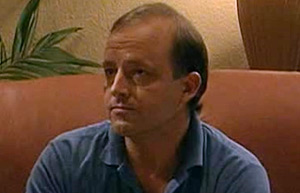 An owner of a massive Great Dane ironically named Tiny, Harry entrusted Sophie Simpson and Karen Dean to look after him whilst they ran their short lived dog-sitting business. When he arrived at the Stewarts to pick him, he discovered that the girls had lost him and told Alf that he was holding him personally responsible for any damages. The following morning the girls found Tiny in the pantry at the Fletcher House, but not until he had caused damage there.