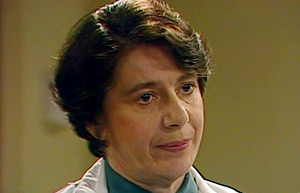 Doctor Ellis was a female doctor who worked at the hospital. She was seen after Tom was brought in after collapsing at The Sands launch party.

She told Pippa he had suffered a stroke and that he would need to be moved to the city for further treatment. She couldn’t tell Pippa if there was going to be any permanent damage, but that Tom came in with exceptionally high blood pressure and asked if he had been under any stress. When Pippa confirmed he had, Dr. Ellis told her that Tom would have to review how he lived life.