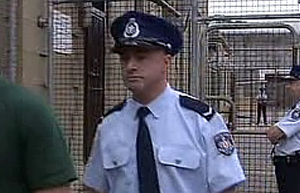 One of the prison guards when Ric was wrongly imprisoned for the murder of Rocco Cooper, Duncan was seen on duty in the visitors’ room when Sally, Cassie and Matilda paid their first visit to Ric. He announced when it was time to go and objected to Matilda kissing Ric goodbye, escorting her from the room and then escorting Ric back across the yard. He was later seen with Guard Jones when they made a failed attempt to catch Johnny Cooper in possession of drugs.