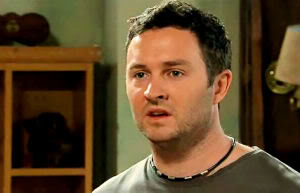 Mick phoned Ric on his mobile phone in regards to information he had on who killed Rocco and he wanted to know how soon they could set up a meeting. Mick came over to Ric’s place, he was surprised to see that Ric had company but Ric assured Mick that they were friends and asked him to come in. Mick used to be in Johnny’s gang but he didn’t like that sort of life and if he didn’t do as Johnny said then he’d end up dead like Rocco. Mick said that it was Dave Carson who was a member of Johnny’s gang that bashed Rocco because Johnny wanted to teach him a lesson. Mick refused to testify in court but he said that he would give the Police a statement on one condition – that Ric got him a plane ticket to Perth and three thousand dollars cash. If Ric got those two things that night then Mick would go to the Police on the way to the airport. Ric made the meeting place at the Surf Club for 7 pm and promised to bring the cash and the ticket.

At the Surf Club, Ric handed over the cash and the plane ticket but Mick was playing dumb and denied that he had ever met Ric before. Ric realised that Mick was still in the gang and that the whole thing was a set up. Ric wanted to fight Mick but Alf and Brad broke it up before it began and Mick still denied his involvement with meeting Ric earlier or any information that he had on Rocco’s murder. Mick walked away but not before he whispered “Johnny said good luck for tomorrow” in Ric’s ear.