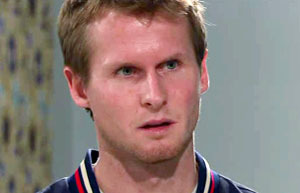 Jimmy was a psychiatric patient who was admitted to the hospital, yelling that the Doctors were trying to kill him. Ric managed to calm him down and he was taken away by a nurse for treatment. Later he was admitted again after Charlie manhandled him into the hospital after he threatened a group of people with a broken bottle. Rachel defended him but Charlie was unrepentant. Rachel managed to calm them both down though.

Jimmy was seen a few weeks later in Noah’s drinking but Alf refused to serve him anymore and he angrily smashed his glass on the bar, cutting himself. Charlie and Harper admitted him to hospital and he told rachel that he didn’t like his medication because it made him feel unmotivated to the point where his girlfriend dumped him because she thought he wasn’t interested in her. Jimmy asked Rachel if he could stop his medication but she convinced him that they could try different medication.

On another occasion, Nurse Julie told Rachel that Jimmy was waiting for her and Jimmy apologised to her for the way he had been acting and asked for an invite to her wedding. Rachel told him that the wedding was only for family and friends but Jimmy insisted that they were friends, forcing Rcahel to tell him that they were Doctor and Patient, not friends.

In The Diner Jimmy overheard Colleen talking to Rachel and Tony about their wedding plans and picked up a dropped honeymoon itinery from the floor. He insisted to Colleen that he would drop it off to Rachel at the hospital but when he approached rachel and she again told him he wasn’t her friend, he failed to give her the itinery.

Rachel asked for a note to be put on Jimmy’s file saying that she shouldn’t treat him anymore and later she saw him at the window of her house but when Tony looked he failed to spot him. Jimmy ws later admitted to hospital badly beaten and Rachel treated him, warning him that he needed to make sure he was taking his medication, even if he didn’t think heneeded it. She told him she was transferring him to another Doctor beacuse they have become too close and Jimmy commented that it made sense seeing as she’d be taking holidays soon. He told her that he heard the Nurses talking about it but Rachel was clearly disturbed by the revelation.

With Rachel having disappeared on the eve of her wedding, Tony and Jack questioned him, Tony with force but Jimmy insisted that he saw her briefly and gave her a wedding prsent but that he left. Jack insisted that he needed to go to the station and make a statement and Aden was later revealed to have kidnapped Rachel.