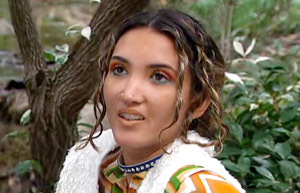 Troubled kid Vanessa was one of the first people Matilda met when she went to the retreat. During a group counselling session, she told everyone of how her mum had died, and her step-dad had left her to care for her younger sister.

Later on, she invited Matilda and Dean to ‘let go’ a bit by screaming as loudly as they could. They weren’t too convinced to begin with, but after a demonstration from the fiery Vanessa, they soon thought it was a good idea and joined in. The team spirit didn’t last for long, though, as Matilda and Dean later saw Vanessa hit Mel, the counsellor. Mel didn’t want to talk to them about Vanessa’s issues and asked them to leave it be.

Not long after, Sky – one of the girls there – told Matilda and Dean that Vanessa was lying when she said her parents were dead, and told them that she was there because she physically hurts her younger sister.

Later on that evening ambulance lights flashed around the retreat, with Matilda and Dean rushing outside to see what had happened. Mel said that she found Vanessa in the toilets. She didn’t say outright but she implied that Vanessa had tried to kill herself.

Whilst visiting back home, Matilda told her family that she had contacted Mel and she had said that Vanessa was being transferred to a retreat that could meet her needs.