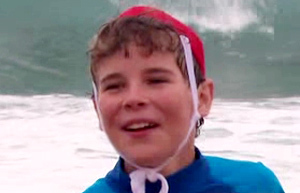 Andy was one of a group of Nippers who Jack was coaching. He and his friend Tim were making fun of Jamie Cooper as he wouldn’t go in the water because of stingers. After the training session Jack challenged the boys to a beach sprint. The race allowed the boys to bond and they celebrated by pushing Jack in the water.