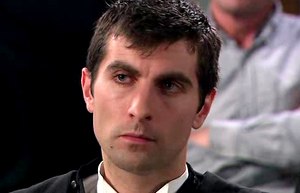 Lloyd was the laywer representing Aden at his trial and tried desperately to get Aden to admit to him being abused and to use it for his defence but Aden refused. He was challenged by Roman but insisted that he had to respect Aden’s wishes. In his questioning of Angelo he discredited Larry and then when questioning Belle he allowed her to bring up Aden’s past with his father and grandfather, causing a furious Aden to fire him.