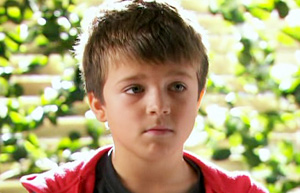 Felix is Sasha’s younger half-brother. When their mother died, he went to live with his father Shawn, with whom he had had no real contact with beforehand, while Sasha went to live with Sid. Felix turned up in Summer Bay in the middle of a storm, having run away from his father’s place. He met Sasha in secret on the beach, telling her Daniel (implied to be an older half-brother) was picking on him. Sasha wanted to go back to the city with him and confront Shawn, promising that soon she’d get them a place of their own, but Felix wanted to stay with her and said if she took him back he’d run away again. Looking for food and shelter, they found the Palmer house unlocked and John collapsed in the front room from a ruptured spleen. Sasha called Sid, who sent an ambulance, but didn’t tell him about Felix. Sasha and Felix remained in the house when the ambulance took John away and raided the fridge for food. When Xavier arrived home, Sasha quickly ushered Felix out the back door before he was seen.

Sasha hid Felix at Summer Bay High, which had been damaged by the storm and left empty. VJ and his friend Ed messed around near the school, throwing stones through the window, and heard a cry of pain. VJ investigated and found Felix with a cut arm. VJ took him home to get him patched up but they were found by Miles, who took Felix to hospital. His identity, and the fact he had been reported missing, were soon established and Sid and Dexter arrived, closely followed by Roo and Sasha, who had panicked when she had found Felix gone. Although Sid was unhappy with many of Sasha and Felix’s acts, including Sasha stealing from the Diner to fund their getaway plans, he was happy for Felix to stay overnight with the family and offered to let him stay there permanently so he and Sasha could be together. However, Shawn insisted Felix come back with him, telling him to come to him if he had any more trouble with the other children and that things would be different. Felix said a tearful farewell to Sasha.

The following year, as soon as Sasha turned sixteen, she went to the city and took Felix out of school, taking him to the park. She told him that, as they’d agreed, she was going to get a job and a place in the city so they could live together. Sid arrived and discussed Sasha’s plans with her before leaving her to make up her own mind. As Sasha and Felix talked more, she learned that he was now getting on well with Shawn and his new brothers, and had taken to calling his stepmother Mum. Deciding he was better off where he was, Sasha left Felix in the city and returned to Summer Bay.