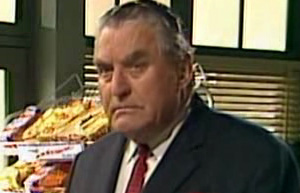 Mervin was first seen offering to give Ailsa a hand with her broken-down car. As he turned to leave, he was accosted by Fisher, who had heard that Tom Fletcher had been interviewed for a job with the local council. After being urged to turn Tom’s application down, Merv later phoned Tom to explain they were looking for someone a little younger. However Ailsa had witnessed Donald talking to Merv and when Pippa lamented how Tom was being turned down for numerous jobs, Ailsa told her what Fisher had been up to.

When Tom bumped into Merv in Ailsa’s store a couple of weeks later, he asked again about a job, revealing that he knew of his conversation with Fisher. Whilst Merv tried to deny it, Ailsa then confirmed what she’d witnessed. Backing down, Merv told Tom that the only job was on the road gang, which he didn’t see as being quite what Tom was looking for, but a determined Tom told him he’d take it regardless.

Note: With the maiden name of Alf’s late wife Martha also being Baldivis, we had speculated whether Merv could have been Alf’s father-in-law. However Bevan Lee, writer of the Pilot episode and Story Editor for the first 18 months of the show, has confirmed to BTTB that he saw Merv as some sort of cousin or other removed relation of Martha’s—given the same surname often pops up in small towns with both close and distant relatives.