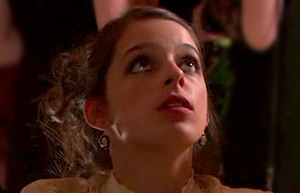 Bianca was one of the girls who attended the party Xavier and Romeo put on at Liam’s restaurant. When Liam turned up, Bianca started making out with his bandmate Ned Re, saying she loved Liam and couldn’t believe Ned played bass with him. Ned put a pill in her drink while they were kissing but at that point Liam stepped in, telling Ned that Bianca was only sixteen and escorting him from the premises while telling Romeo to shut the party down before he got back. Bianca unknowingly took a different drink from the one Ned had spiked as she made herself scarce.