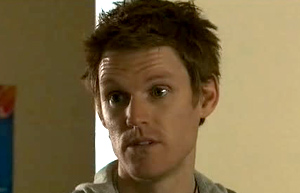 Terry ran the Melbourne hostel where Melody stayed after running away from Summer Bay. She complained to him that someone had stolen her bag during the night. Terry told her he’d look out for it but wasn’t optimistic about recovering it, prompting Melody to leave in anger. Later, when Charlie turned up looking for Melody, Terry told her what had happened and that Melody had said she wasn’t coming back. Charlie gave him her number and asked him to get Melody to call if she did show up. Melody later returned and apologised but Terry told her they were only allowed ten people staying there and their quota was full. He told her the police were looking for her and tried to convince her to call and let people know she was all right, but only managed to persuade her to take Charlie’s number.