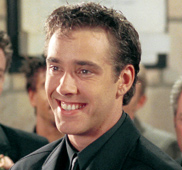 How They Met
Sally met Kieran when they were accidentally checked into the same hotel room in Ireland, due to their identical surnames.

The Relationship
Their relationship was a whirlwind one and by the time Sally bought Kieran to Australia to meet her family and friends they were engaged and planning a very quick wedding.

The Wedding
It was to be a church wedding with the reception in the Surf Club. Sally wore a white, full flowing, romantic dress made by Pippa and had her hair up and held in place with white and apricot flowers. Her bridesmaid, housemate Shauna wore matching flowers and a full length, strapless dark grey/ black dress which matched the ties and flowers on Kieran and the best man, his friend Luke. Family on Kieran's side was relatively sparse but on Sally's side her foster mother Pippa, foster sister Carly and Foster brother Jack plus old friends Floss, Lance and Martin, turned out in support. Vinnie was on hand as the unofficial wedding photographer The bride was due to be given away by family friend Donald Fisher but at last minute he stepped aside and she was given away by her foster brothers Steven and Frank. 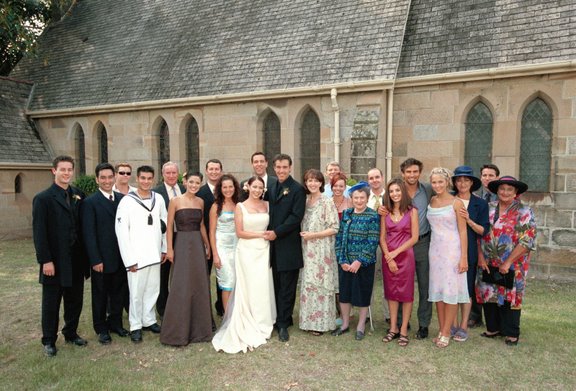 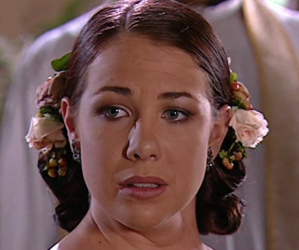 What Went Wrong?
Everything seemed to be going perfectly up until spoke of honesty ad faithfulness in his vows and Gypsy Nash stood up and announced that Kieran had been cracking onto her. Initially disbelieving her, Sally was upset that her wedding had been spoilt until both Hayley and Colleen corroborated Gypsy's story. A devastated Sally raced from the church.

Happy Ever After?
Not from this wedding. Sally refused to listen to Kieran protesting his innocence and it took her a long time to forgive Gypsy. The lasting repercussions for Sally included an outbreak of OCD as the wedding bought up childhood fears of rejection. For Kieran it wasn't so much lasting repercussions, unless you count his best man not only taking Sally's side but later dating her.  He did however receive a temporary inconvenience at the hands of Steven, Sally's karate kid brother. 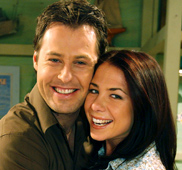 How They Met
Flynn came to the bay as Shelley Sutherland's new counsellor at the Drop in Centre. He almost immediately made a play for Sally who had doubts because her friend Shauna fancied him too.

Relationship
Lots of ups and downs but a real sense of genuine love grew between Sally and Flynn. They were together a few years before Flynn surprised Sally by proposing in front of a class of her school pupils and their engagement lasted longer than most as Sally took time planning her perfect wedding.

The Wedding
The venue was an open air, picturesque clearing beside a lake. Sally wore a simple, full length white dress with a veil on half up, half down hair. Maid of honour Leah wore her own clothes and Flynn and best man Jesse wore simple, tailored black suits. Donald Fisher performed the ceremony and Alf Stewart gave Sally away. Family saw Flynn's dad return for the occasion and Sally was joined once again by foster mother Pippa, foster brothers Steven and Christopher plus old friend Lance. 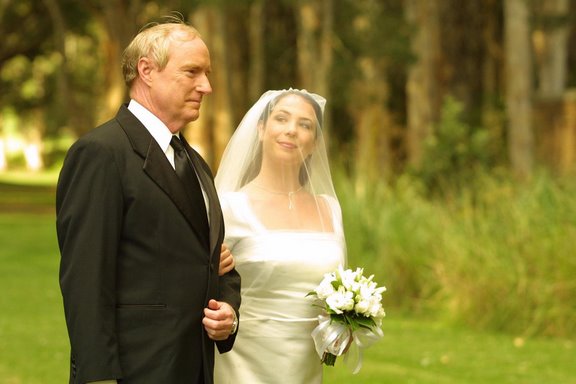 What went wrong?
Everything! The horse bolted leaving Sally and Leah to walk to the service with Sally falling into a puddle, fighting with Leah and getting scratched in the bush. They were picked up by Scott and arrived at the ceremony, hours late on the back of a hay truck. No sooner had the ceremony got underway than the heavens opened and Sally and Flynn relocated to Sophie's hospital bedside where they were married in towelling robes 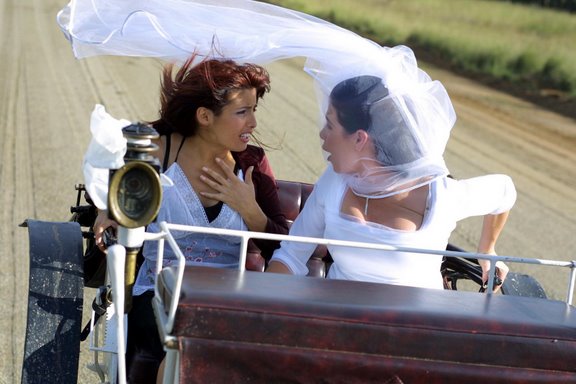 Happily Ever After?
For a while things went well for Sally and Flynn as they overcame obstacles such as fostering two teenagers and his addiction to prescription drugs. Sadly things were to end in tragedy as Flynn was diagnosed with terminal cancer and died in Sally's arms. 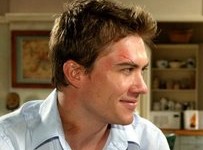 How They Met
Sally went round to see Rachel but found Brad instead. Having locked himself out of the house in just a towel, an attempt at breaking in left him minus the towel and hiding behind a wheelbarrow just as Sal came to see what the noise was all about.

The Relationship
This one was a slow burner. Their initial attraction cooled after Brad revealed he was married but when Sally supported him after his wife Emily died, their attraction grew to something stronger. They shared a tentative kiss but almost immediately afterward Sally was stabbed and left for dead and they decided to give a relationship a go. Brad moved in and after he lost his job he proposed to Sally. She initially refused but after he was missing overnight she changed her mind and Brad began planning their wedding. 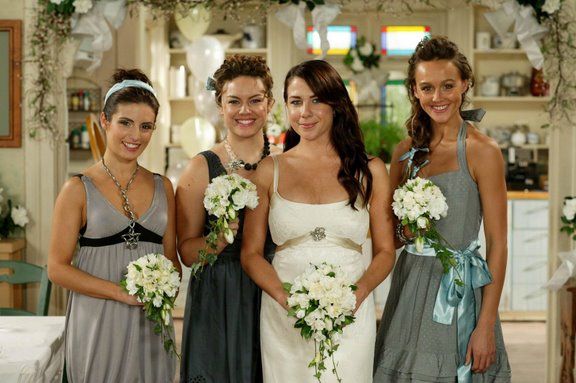 The Wedding
Unusually Sally had very little to do with planning her wedding; Brad and her friends and family planned everything. The venue was outdoors, overlooking the beach, under a marquee. Chairs were draped with white covers and an altar made from a covered table. Sally wore a simple, elegant, white dress and her hair loose. Her bridesmaids, best friend Leah, Brad's sister Rachel and foster daughter Cassie picked out their own style of dresses but in a matching grey colour and daughter Pippa wore white as a flower girl. Brad and best man Ric, standing in for Henk, wore grey suits with *. With his mother dead and his father on the run, family for Brad came in the form of his bridesmaid sister Rachel. Sally was joined once again by her foster mother Pippa and family friend Donald Fisher who, after Alf had the honour at her last wedding, was to give her away. 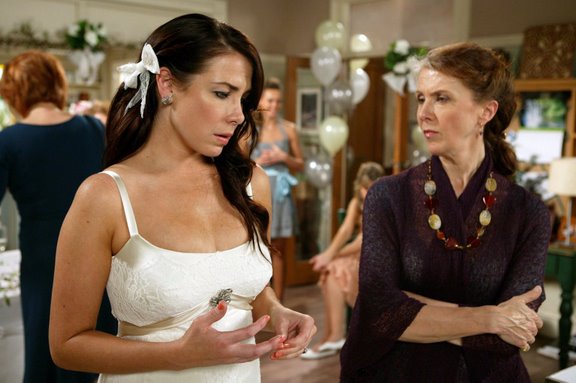 What went wrong?
After months of feeling like things were going too fast for her, decisions being taken out of her hands  Sally finally broke down and admitted to Pippa that she couldn't go through with it. Despite Pippa and Donald's best attempts, Sally told them she loved Brad but couldn't marry him because in her heart she was still married to Flynn.

Happily Ever After?
Third time unlucky. Brad struggled to forgive her for leaving him stranded at the altar and though they finally shared a kiss and Brad told her he still loved her, he also told her that he wasn't really what she wanted. Seeing the truth in his words, Sally bid him a tearful farewell and he departed for a new life in Tasmania.